Georgia centre Giorgi Kveseladze believes he is ready for the next step in his career, after being rewarded for a string of impressive Autumn Nations Cup appearances with a two-year contract at English Premiership side Gloucester.

The 23-year-old played in all four of the Lelos’ Championship matches, and claimed the coveted Try of the Tournament award for his stunning individual effort away at Ireland in Round 3.

Having already amassed 29 Test caps and established himself as a key component in a national team side consistently growing in stature, Kveseladze has long drawn the attention of several clubs across Europe.

But having finally committed to five-time English top tier runners-up Gloucester – with whom he will link up immediately – the former RC Armazi Marneuli man is looking forward to furthering his game.

“I am very proud to sign for such a traditional club,” he said. “I know the club very well and I am really happy to have this opportunity to join Gloucester Rugby.

“At the same time I feel big responsibility, but it is time for new challenges in my life. 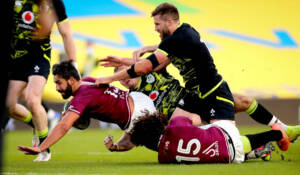 While gunning for glory with the Cherry & Whites, Kveseladze is also hoping the experience he will gain from plying his trade in one of the world’s most competitive leagues can enhance the prospects of the Georgia national team.

Levan Maisashvili’s men fell to an eighth-place finish without victory at the Autumn Nations Cup, but having proved competitive in each of their games and drawn praise for their battling attitude, Kveseladze is confident of continued progression going forward.

He added: “Though we lost all of our matches, the Autumn Nations Cup was productive and our national team gained valuable experience.

“We really need to play against those sorts of teams as often as possible in order to grow bigger and become stronger. But most importantly for me, these games helped me see I have to work more myself.”